Do you have a Big Time Rush fan in your house? If so I have got the perfect gift idea for you. GameMill Entertainment recently released the Big Time Rush Dance Party Video Game for the Wii. The video game is based on Nickelodeon’s hit TV show and teen music phenomenon, Big Time Rush. 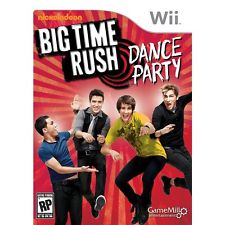 Within the game players are given an all-access backstage pass to experience the thrill of on-stage performances as they sing and dance to the beat of the boy band’s hit songs. Some of the songs you will find on this game include:

-Big Night
-Til I Forget About You
-Elevate
-Boyfriend
-Oh yeah
-Windows Down
-Superstar
-And Many More!

Up to four players can play at the same time and light up the dance floor along with James, Logan, Kendall and Carlos. Play in either Free Play Mode where you can pick which songs you would like or you can play in Career Mode and work your way up. Either way, your Big Time Rush fan is sure to have a blast with this Dance Party.

* I received a copy of this game in exchange for my review. All opinions expressed are my own honest opinion.