Last year we were sent a copy of Epic Mickey. Being the die-hard Disney fan that I am I was probably more excited about this game than my kids were. We were thrilled with the game and have continued to play it over this past year. A few months ago I heard through the grapevine that they were releasing Epic Mickey 2: The Power of Mickey just in time for the holidays and I couldn’t wait to try it out and see if it held up to the first game. 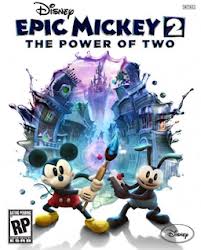 In Disney’s Epic Mickey 2, Mickey Mouse and Oswald the Lucky Rabbit return for an all new adventure in Wasteland. Wasteland is an alternate world that consists of 80 years of forgotten Disney characters and theme park attractions. Sounding pretty cool, isn’t it! Unlike the first game Mickey and Oswald will join forces to complete the game. Mickey will have his trusty magical paint brush that wields paint and thinner and Oswald will have powerful remote which allows him to control electricity. 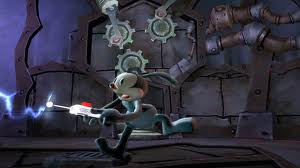 Mickey’s brush does some pretty amazing things like rebuilding the structures that are destroyed and defeating enemies. As in the first game, the graphics are amazing and I love the storyline that starts right from the beginning. It’s almost like your about to watch a Disney movie. This game will definitely make you think, it’s a puzzle type game and your going to have to get your brain moving in order to figure out some of the levels. My son is eight and while he can play certain parts of the game by himself he does need quite a bit of help. That’s one of the reasons why I like the combo play, we can play together and figure out things together. 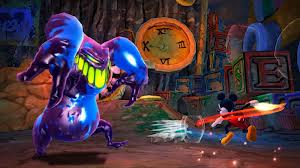 Overall I really liked this game. It’s got some great improvements from the first Epic Mickey like its much more colorful and upbeat. I have only been playing the game for about a week now, so I haven’t finished it yet but I am excited to see what the new levels have in store for us.

I think this game would make a great stocking stuffer for Disney fans, Adults or older kids ages 7+. You can now purchase Epic Mickey 2: The Power of Mickey online or in stores for around $49.99. Keep your eyes out, because I have seen this game on sale at several major retailers.

*I received a copy of this game. All opinions expressed are 100% honest and my own.